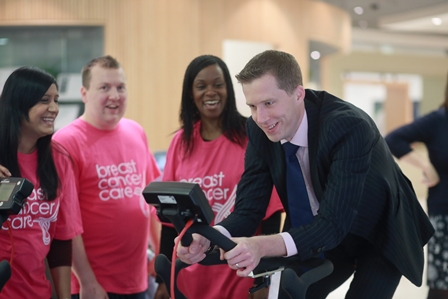 We are delighted that this year’s Tour de Law cycle event, which we provide pro-bono PR and marketing support for, has raised a record £100,000 for Breast Cancer Care. This total is 45% more than the previous record, set last year, of £68,720.68.

Simmons & Simmons were announced as the champions in the annual Tour de Law legal cycling challenge for Breast Cancer Care, on Friday morning.

The annual competition saw twenty-three law firms across the country battle it out to be the first to cycle 1000km, the distance of London to Paris and back, on Wattbike exercise bikes.

Latham & Watkins raised £12,846, which is the highest any firm has ever raised in the event, winning them the Best Fundraising Firm prize.

The Fastest Firm was won by Simmons & Simmons, with Willkie, Farr & Gallagher in second, and Latham & Watkins in third.

All funds raised from Tour de Law go towards Breast Cancer Care, the UK’s only nationwide breast cancer support charity, to help them be there for people who are diagnosed, every day, from day one.

The legal sector has a history of supporting the charity, with this being the fourth year of the annual competition.

Partner at Simmons & Simmons Chris Horton commented: “Our support of Tour de Law generated huge enthusiasm throughout the firm which is reflected in the success of our cycling and fundraising results. Many thanks to all the riders and everyone else at Simmons & Simmons who contributed so generously to this excellent cause.” Simmons & Simmons Partner Caroline Hunter-Yeats continued: “We are delighted for Breast Cancer Care and in the part that we played to meet their fundraising target.”

It was also the most watched – with over 19,000 people following the live racing results online.

Jay Sadanandan, Office Managing Partner at Latham & Watkins said, “We are delighted to have once again supported this fantastic Tour de Law event. It was another great team effort and involved the majority of our London office as cyclists, supporters and fund raisers. We’re already looking forward to next year!”

The popularity of the competition continues to grow and applications for next year have already started to come in. Firms wishing to take part in the 2016 event should contact Breast Cancer Care’s Corporate Partnerships team.

The full results can found online at www.tourdelaw.com/winners