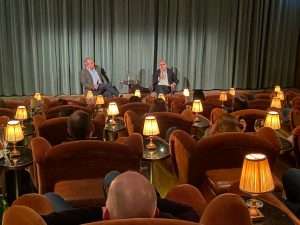 Many thanks to Simkins for hosting a special screening of The Duke, the critically acclaimed film co-written by former BBC Legal Correspondent and Maltin PR Senior Partner, Clive Coleman.

The screening took place in the fabulous screening room at Soho House in Dean Street. We sunk back into the large, cosy armchairs with drinks on elegant side tables as Clive and Simkins Partner Jon Oakley introduced the film, which was screened in extraordinarily high definition film and sound.

The Duke tells the true story of the theft of Goya’s portrait of the Duke of Wellington in 1961, and the Old Bailey trial of Newcastle pensioner Kempton Bunton, who claimed he had stolen it to draw attention to the plight of old age pensioners and war widows.

The Duke has attracted a raft of five star reviews which pick out both the script and brilliant performances by Jim Broadbent and Dame Helen Mirren.

In a Q & A following the film Jon Oakley and Clive discussed how the story came about, how it fell into Clive’s hands, and how much of what is on screen was true to the real story (the vast majority of it!). Clive told guests how Helen Mirren and Jim Broadbent came on board and how Kempton Bunton’s defence – brilliantly constructed by his barrister, Jeremy Hutchinson QC – led the government of the day to change the law of theft!

We are very grateful to Simkins for this wonderful evening.

Tax Investigations Partner, Andrew Park, examines the reasons why, despite enhanced international co-operation and reduced #offshore secrecy in recent decades, #HMRC is unable to estimate the #offshoretaxgap, in @IntAdviser http://bit.ly/3BQ1Xsv